New Delhi: Union Minister for Steel, Shri Chaudhary Birender Singh has exhorted the steel industry to make the year 2019 the “Year of Expansion” – expansion in terms of reaching out to new regions and areas of the country, to new markets and user industries and to other countries for exporting our steel. He has called upon everyone to accelerate the pace of work towards achieving the target of 300 million tonnes by 2030-31, as envisaged by National Steel Policy. He said that this will require new ways of doing things, new thinking, new investments, new ideas and new synergies. He asked the industry to come up with new technology and innovation for steel, so as to fulfill the aspirations of the government for Make in India. Minister expressed confidence that the steel industry will live up to this challenge. The Minister was addressing the inaugural session of India Steel 2019 Exhibition and Conference, in Mumbai today.

Welcoming the international and domestic delegates to the mega event, the Minister said that the Ministry of Steel has been organizing India Steel Exhibition and Conference with the objective of improving trade, dialogue and international outreach of Indian Steel industry. He said that the Indian steel industry is vibrant and robust today, with 8.4 % growth in steel consumption and 4.5 % growth in steel production in the first nine months of 2018-19. The Minister said that this has been due to a series of initiatives taken by the Government of India, since 2014. He said that the sector, which was down and depressed, has been brought back to a state of normalcy by 2017, and has now become one of the most promising sectors.

The Steel Minister elaborated that the transformation has been made possible by the joint efforts of the Government, steel companies and other stakeholders. He said that the year 2017 was the “Year of Policy Boost” for the steel industry. Two policies were approved by the Cabinet in May 2017 and were rolled out in 2017. The National Steel Policy 2017 envisages a steel production capacity of 300 million tonnes and per capita steel consumption of 160 kg by 2030. Shri Singh said that we are moving steadily in that direction, and are on course to attain these targets. The DMISP Policy for preference to domestically manufactured iron & steel products has already resulted in bringing down foreign exchange outflow to the tune of Rs. 8,000 crore. Moreover Indian steel companies are getting an opportunity to prove their capability and potential and are becoming more competitive, said the Minister.

The Minister stated that Year 2018 was the “Year of Consolidation” for the steel industry. The steel industry structure has undergone an overhaul with NPA resolution developments under IBC (Insolvency & Bankruptcy Code). Maiden Secondary Steel Awards were presented last year. We took a giant step in the direction of self-sufficiency and Make in India, when stakeholders from India and abroad came forward to commit investments in making capital goods for steel industry in India.

Shri Singh said that growth trend in steel consumption in India will continue, due to strong manufacturing sector, diversified demand demographics, accelerated expenditure on infrastructure, anticipated increase in GDP and strong focus on ‘Make in India’. He noted that a budget of around Rs. 6 lakh crore was allocated for spends on infrastructure in this financial year. Based on these enabling factors and with huge potential yet to be tapped, the per capita consumption can easily be increased from the current levels, said the Minister.

Minister said that the focus areas of Ministry of Steel are denoted by word PRIDE – P for production and productivity, R for Research & Development, I for Indian-made Steel, D for demand increase and E for Excellence in Quality of steel. He expressed satisfaction that the Government has been able to bring a shift in mindset and work culture in these areas, as demonstrated by actual performance. In production, India has already surpassed Japan in the first 11 months of 2018, to become the second largest crude steel producer in the world. In terms of R&D for steel industry, SRTMI has been operationalised and two PSUs, SAIL & RINL have spent more than Rs. 1000 crore on R&D in last three financial years. As far as Indian-made steel is concerned, the Minister said that DMISP Policy is a historic step in that direction. Excellence in Quality is evident from the fact that already around 86 % products are covered under Quality Control Orders; we are moving towards a 100 % quality regime by taking along all big and small steel producers, said the Minister.

The Minister said that the Ministry of Steel has successfully established this mega platform- INDIA STEEL so that investors and exhibitors can showcase India’s strength in the steel sector through the latest products, technology, and machinery of Indian steel industry, which would ultimately help in disseminating knowledge about new applications of steel to diverse user segments. He said that the event will be a convergence point for manufacturers, suppliers, machinery companies, consultants, engineers, agents, traders, distributors, and experts in the steel industry.

Shri Singh stated that the conference being organized at India Steel 2019 would serve the underlying purpose of ushering the next era of growth for Indian steel industry as it focuses upon the entire value chain, from raw materials to production technology to end-user demand and delivery. The event is an important platform where the Government can hear from the Industry and the inputs received can be used for policy formulation and implementation.

The Minister assured the industry that the Government will leave no stone unturned in creating an environment for the Indian steel producers in which they can focus on opportunities and growth, by overcoming the challenges.

Interacting with the media, the Minister announced that the new National Steel Safety Board will be constituted shortly.

Addressing the gathering, Steel Secretary, Shri Binoy Kumar said that the Government is working on an Action Plan to ensure smooth implementation of the National Steel Policy.  He said that The NSP, along with Policy for Preference to Domestically Manufactured Iron & Steel Products (DMI&SP), is not just aimed at providing a boost to the steel industry in the country but to also act as a facilitator to the ‘Make In India’ initiative of the government. He added that this policy has resulted in savings of more than Rs. 8,000 crore till date.

The Secretary informed that sixteen more steel products were recently brought under Quality Control Order, which now covers a total of 53 products. The Government endeavours to bring more products under the Quality Control Order in its efforts towards prohibiting production, import and distribution of substandard products, said Shri Kumar. He also said that the Ministry is working with the Ministry of Mines in formulating a new Mineral Policy, which would make investment in Iron ore exploration and mining attractive. This will provide an impetus to iron ore mining in the country, explained Shri Kumar.

India Steel 2019 Exhibition and Conference is being held in Mumbai from 22nd to 24th January, 2019. The three-day event, being organized by Ministry of Steel, will help chart out the growth path of the steel industry. The event will witness the participation of the companies across the industrial spectrum ranging from MSMEs to the biggest names in the Indian and international steel sector. The event provides an opportunity for all the stakeholders to deliberate and identify ways to contribute towards building a robust roadmap for the further growth of the steel sector. The presence of international technology providers is an added attraction for the Indian companies to interact with them for technology upgradation or technology transfer. The products, technologies and the best practices of steel production around the globe will be on display at the exhibition.

Over 250 exhibiting companies from 15 countries, over 200 International hosted buyers and large number of delegates are expected to hold business meetings during this event. More than 10,000 business visitors both from India and abroad are expected to visit.

Ministry of Steel organises the India Steel Exhibition and Conference once in two years. Over the years, the event has become the most preferred platform for buyers, sellers, technology providers, manufacturers, traders, importers, investors and other allied organizations and institutions from steel sector to interact and develop business. India has become the second largest producer of crude steel during 2018. The country is also the largest producer of sponge iron in the world and the 3rd largest steel consumer in the world after China and USA. The National Steel Policy 2017 announced by Ministry of Steel envisages production of 300 million tonnes by 2030-31. The Government has also announced a policy for providing preference to domestically manufactured iron and steel products in government procurement. The India Steel-2019 is part of series of initiatives to develop a globally competitive steel industry in line with NSP-2107.

PM expresses condolences on the passing away of George Fernandes 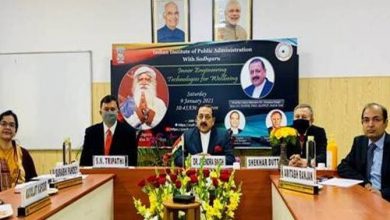