The Union Home Minister Shri Rajnath Singh congratulated the entire force of CRPF and the 45th battalion of CRPF in particular, and J&K police for their alertness and unmatched courage shown in CRPF’s Sumbal camp today.

Following is the text of Home Minister’s statement:

“Early this morning at around 4 am a group of heavily armed Fidayeen terrorists approached the CRPF’s Sumbal camp with the intent of breaching the camp. They were heavily armed with automatic rifles, grenades and incendiary material such as petrol, and were carrying dry rations which indicates they intended a prolonged siege and extensive damage.

The group attempted entry by cutting the wire fencing and also forcing their entry by shooting at the sentry. The sentries responded with alacrity to their efforts and returned their fire. Heavy exchange of fire took place, during which the terrorists lobbed more than two dozen grenades, in an attempt to escape. However the CRPF, in cooperation with force from the adjoining J&K police camp shot dead all the 4 terrorists

The CRPF jawans and J&K police showed exemplary courage and valour by thwarting the terrorists’ attempt to enter the camp and in successfully eliminating all the terrorists.

Massive recoveries of arms and ammunition including grenades, explosives and automatic weapons have been made from these neutralised terrorists.

It is inspiring to see the CRPF jawans staying awake all night and maintaining tight vigil; and to see J&K police jawans coming to CRPF assistance quickly. Their joint efforts have brought glory to our forces.

The nation salutes and I congratulate the 45th battalion of CRPF in particular; and entire force of CRPF and J&K police for their alertness and unmatched courage. Commandant Shri Iqbal Ahmad, company commanders Shri Shankarlal Jat and Shri Pankaj Hallu, Guard Commander Shri Pankaj Kumar and Constables Shri K Dinesh Raja and Shri Praful Kumar, and all the brave officers and jawans posted at Sumbal camp, need to be cited for their alertness and unmatched bravery.”

President of India’s Greetings on The Eve of Dussehra

Priority of Government is to set up at least one Community Radio Station in each Aspirational District: Shri Amit Khare 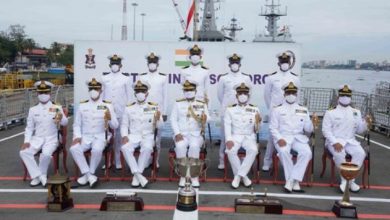 PASSING OUT OF OFFICER TRAINEES AT NAVAL BASE