New Delhi: The Commerce Ministry and Indian High Commissions and Embassies of eleven African countries arranged an interaction over Digital Video Conference (DVC) over two days, on 3rd and 6th May 2019, with the Indian business community in Africa. The interactions with Indian Diaspora were held in Tanzania, Uganda, Kenya, Zambia, and Mauritius, Nigeria, Mozambique, Ghana, South Africa, Botswana, and Madagascar. This initiative was held in order to build an effective engagement withthe Indian Diaspora in Africain order to further deepen and strengthen India-Africa trade ties.

The DVC was attended by over 400 members of Indian business community in 11 African countries.

This initiative of the Commerce Ministry emphasizes the need for a multipronged strategy for further enhancing trade and investment ties between the two regions. Commerce Ministry recognizes that for formulating an effective export strategy it is imperative to engage the Indian business community in Africa for mutual gain for both sides as trade relations between the people of same origin instill greater confidence amongst trade partners.

The Indian community in Africa is playing a vital role in all fields like politics, business and education.As per the latest available estimatesthe current strength of the Indian Diaspora in the African countries is 2.8 million out of those 2.5 million are PIOs and rest 220967 are NRIs.Total overseas Indians are 30.83 million of which 17.83 million are PIOs and 13 million are NRIs. (Ministry of Overseas Indian Affairs, 2016). Indian Diaspora in Africa constitutes 9.11% of the total Diaspora of India.

The inherent strength of India in Africa is its rich and vast Diaspora which has established strong links with the political, economic and social fabric of the African continent. In order to formulate astrategy to boost India-Africa Trade & Investment, the Indian Diaspora in Africa has to be leveraged furtherin order to ensure that the strategy is effective. Suggestionswere sought from the India business community.

The major issues highlighted by the Indian Business Community in these 11 countries are:

Department of Commerce welcomed the suggestions of the Indian business community and assured them that these suggestions will be shared with relevant stakeholders /Departments in order to incorporate the suggestions in the India-Africa strategy for trade promotion.

Senior officers from Department of Commerce and Ministry of External Affairs were present during the interactions. 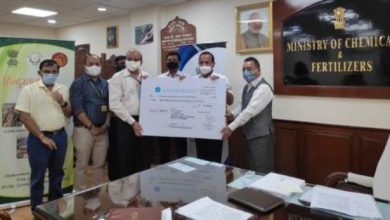 Union Minister for Chemicals and Fertilizers handed over the cheque of Rs. 813.24 crores to HURL in respect of Interest Free Loan

A commemorative postage stamp released on completion of 50 years of Passport Act.

Good quality education is the most potent ways to reduce poverty