However, Public Health is a state subject. Under the National Health Mission(NHM), support is provided to States/UTs to strengthen their health systems for provision of accessible, affordable and quality healthcare to all the population in rural areas based on the proposals of States in their Programme Implementation Plans.

Under NHM, funds are released to States/ UTs to strengthen their health-care systems including rural medical facilities so as to provide universal access to equitable, affordable and quality healthcare services.

Details of amount sanctioned for Hospital Strengthening and New Constructions/Renovation for the Financial Year 2014-15 to 2017-18 for the state of Uttarakhand is given below:

Under NHM, the resource envelope of any State/UT is determined by the socio-economic factor and health indicators of the State/UT.

In view of above, 3 Himalayan hilly states namely Himachal Pradesh, Jammu & Kashmir and Uttarakhand have been given a weightage of 3.2 times over other states.  Apart from this, hilly and tribal areas enjoy special dispensation under NHM, the details are given below:

Special dispensation within NHM provided to hilly and tribal areas

Under National Health Mission (NHM), financial and technical support is provided to States to strengthen the public Health system including up gradation of existing or construction of new infrastructure.

Relaxation has been made available on a case to case basis for hilly/tribal/desert areas, where the populations are widely dispersed and the geographical terrain is difficult.

The Minister of State (Health and Family Welfare), Sh Ashwini Kumar Choubey stated this in a written reply in the Rajya Sabha here today. 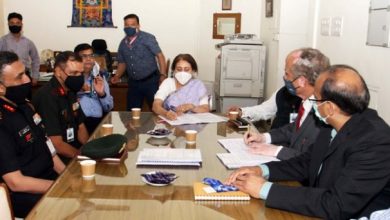