Ministry of Railways has been laying great emphasis on improvement in Railway infrastructure in the North-eastern region.

Out of 8 States of North Eastern Region, rail network connectivity now exists in 7 States. For, Sikkim, the new line project Sivok-Rangpo (44 km) has been sanctioned.

First of all, entire metre-gauge section in North-east region has been fully converted into broad-gauge line.

(i) Naharlagun which is 10 km short of Itanagar, the capital of Arunachal Pradesh, has been connected to the National Capital by a direct train.

(ii) With commissioning of Balipara-Bhalukpong line after gauge conversion, Arunachal Pradesh have been provided with second Broad Gauge connectivity.

(iv) Meghalaya has been brought on railway map of the country with commissioning of Dudhnoi-Mendipathar railway line.

(v) With commissioning of Lumding-Silchar Broad Gauge line, the Barak Valley has been brought on Broad Gauge network of the country.

(vi) Agartala, the capital of Tripura has been brought on Broad Gauge network.

(vii) With commissioning of Gauge Conversion of Arunachal-Jiribam section, Manipur state has also been connected with Broad Gauge network.

(viii) With commissioning of Kathakal – Bhairabi Gauge conversion, the State of Mizoram has come on Broad Gauge network.

(ix) Around 900 km of Metre Gauge has been converted into Broad Gauge. Now, no metre gauge line exists in the North-eastern region.

(x) 29 new train services have been added in the North Eastern Region. 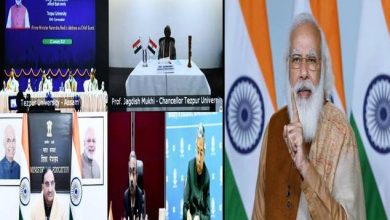 Spirit of Aatmnirbhar Bharat is in sync with the mood of today’s youth: PM

English rendering of the Prime Minister’s statement ahead of the beginning of the Monsoon Session of Parliament on 17.7.2017