Mumbai: Continuing to voice concerns over populist measures, the Reserve Bank Wednesday warned that income support schemes and farm loan waivers will lead to fiscal slippages for the states.

The remarks were made during a meeting between the members of the 15th Finance Commission and the RBI brass, including governor Shaktikanta Das and the deputy governors, at the central bank headquarters here.

In its presentation, the RBI listed out specific factors that would drive fiscal slippages in the revised estimates of 2018-19, including ‘farm loan waivers and income support schemes’, an official release said.

The presentation mentioned that in the past, states’ fiscal position was stretched due to the Uday bonds for the power sector.

It can be noted that ahead of the general elections, a slew of states and also the Centre had doled out sops to the marginalised sections, including the farmers and the poor.

While the BJP-led states have announced sops in the face of rural distress and agitations, three Congress-led ones made it a point to declare such schemes soon after taking over the office last December.

The Centre has drawn inspiration from the income support scheme of Andhra Pradesh and extended it to the poor households nationally, while the Congress is promising an assured income of Rs 72,000 per household through income support if it is voted to power, which is being dubbed as a scheme which would drain resources.

All RBI governors have been repeatedly flagging its concerns on the fiscal slippages, primarily because of its impact on inflation, its core mandate.

According to the presentation, the importance of states in the economy has increased with the shift in composition of government finances.

‘Fiscal deficit of states is budgeted to be lower in 2019-20 BE (Budget Estimates), but RE (Revised Estimates) and actuals deviate significantly (reflecting poor fiscal marksmanship),’ the release said quoting the presentation.

Other key issues raised by Das, who was a member of the commission before being appointed as the governor last December, included necessity of setting up state finance commissions, public sector borrowings and ‘continuity of finance commission’, the release said.

The visiting Finance Commission team, led by chairman N K Singh, also had a meeting with senior economists and is likely to meet top bankers Thursday.

Besides, the Commission Wednesday deliberated on the need to set up such panels in states during the meeting.

Other issues that came up for discussion, included public sector borrowing requirements and continuity of the Commission as well as development of expenditure codes, especially given that expenditure norms vary from state to state. 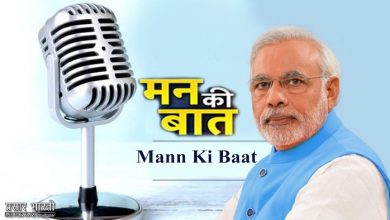 PM’s address in the 75th Episode of ‘Mann Ki Baat’

India and Japan are looking to have trusted partners from authentic investors: Piyush Goyal