New Delhi: Upcoming Hot Weather Season (April to June-AMJ) is expected to have the above normal sub-divisional average seasonal temperatures (maximum, minimum and mean) over most of the meteorological sub-divisions of the country except the subdivisions of eastern, east central and southern parts for the country that are likely to experience slightly below normal seasonal temperatures.

India Meteorological Department (IMD) issues operational seasonal forecast outlooks for subdivision scale temperatures over the country for both hot and cold weather seasons. These outlooks are generated based on predictions from the Monsoon Mission Coupled Forecasting System (MMCFS) Model and implemented by the office of Climate Research and Services (CRS), IMD, Pune. This year IMD had issued temperature outlook for the pre-monsoon season of March to May (MAM) on 28th February, 2018 in which it was forecasted that warmer than normal temperatures are likely during the MAM season in all meteorological sub-divisions (except Sub Himalayan West Bengal and Sikkim) of the country. Now the seasonal temperature outlook for the 2018 hot weather season of April-June (AMJ) is presented now.

Fig.1, Fig.2 & Fig.3 depict the forecasted distribution of the sub-divisional average maximum, minimum and mean temperature anomalies respectively over India for AMJ 2018. It suggests that warmer than normal temperatures are expected to prevail in most of the subdivisions with maximum anomalies in subdivisions from northwest India and north India. However, normal to slightly below normal maximum temperatures are likely to prevail over subdivisions of eastern, east central and southern parts of the country. Overall, the seasonal (AMJ) temperature anomalies are likely to be colder than those observed during the corresponding season of 2017.

The research version of the MMCFS was developed by Indian Institute of Tropical Meteorology (IITM), Pune in 2012 and has been used to prepare seasonal forecasts since then. The latest version of the MMCFS has a spatial resolution of about 38 km and improved modules of model physics. The seasonal temperature forecast outlook for the April to June 2018 is prepared based on the March 2018 initial conditions using 41ensemble member forecasts.

IMD also provides extended range forecasts (7 –day averaged forecasts for the next four weeks) of maximum and minimum temperatures over the country updated every week. This is based on the Multi-model ensemble dynamical Extended Range Forecasting System currently operational at IMD, New Delhi. The forecasts are available through IMD, Delhi website (www.imd.gov.in).

In addition to the above, IMD maintains round the clock watch of the temperature scenario and issues heat wave warnings as and when required at meteorological sub-divisions level valid for next 5-days through National Weather Forecasting Centre (NWFC), Delhi and at district level through Regional Meteorological Centers and Meteorological Centers at states along with daily updates.

Mantle of Administration handed over at Headquarters Western Air Command 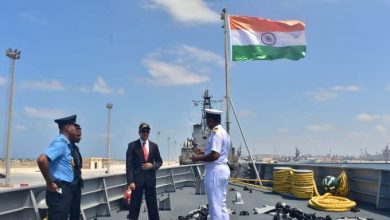