New Delhi: The Vice President of India, Shri M. Venkaiah Naidu kicked off his four-day official visit to Vietnam by addressing the Indian community soon after his arrival at Hanoi today.

Describing the ties between India and Vietnam as civilizational and historic, the Vice President said “our partnership has stood the test of time. More than 2000 years ago, Indian monks and traders brought with them the message of peace and compassion of Lord Buddha to Vietnam”.

Shri Naidu said that successive generations of leaders from Ho Chi Minh and Mahatma Gandhi to the current leaders have built upon this trust and goodwill.

Referring to the Comprehensive Strategic Partnership between the two countries, Shri Naidu stated that India is committed to building its cooperative relationship with Vietnam in diverse fields.

Pointing out that agricultural growth has been a key driver in the remarkable progress achieved by Vietnam, he said India was privileged as a development partner to have contributed to Vietnam’s agricultural revolution and food security.

The Vice President said the Indian community in Vietnam, though small in number, has numerous achievements to its credit and was well respected. Indians and Indian business and industry in Vietnam have been instrumental in promoting bilateral understanding and creating opportunities for the local economy and society.

Expressing his satisfaction over the doubling of the trade between the two nations from US Dollars 7.8 billion in 2016 to nearly US Dollars14 billion last year, he said both the nations must come together with pride and purpose and help each other grow and prosper.

Referring to India’s growth story, the Vice President said that an ambitious and transformative vision was making India one of the most favorite investment destinations in the world. India has become the fastest growing large economy in the world. “We will be a USD 5 trillion economy by 2030”, he added and gave a detailed overview of the progress achieved in various sectors.

Observing that India was moving fast to transform itself into a modern 21st century inclusive economy, Shri Naidu said three D`s–Democracy, Demand and Demographic Dividend were scripting India`s story and termed the Indian Diaspora as the fourth D. He urged the Indian Diaspora to contribute and join in the development agenda back home.

Describing Indians living abroad as our cultural ambassadors, he told them continue to cherish their Indian roots and rich cultural traditions and at the same time nourish the socio-economic and cultural life of Vietnam.

The Vice President said that he was looking forward to his official engagements with the Vice President, Mr. Dang Thi Ngoc Thinh, the Prime Minister, Mr. Nguyen Xuan Phuc and Chairperson, National Assembly of Vietnam, Ms. Nguyen Thi Kim Ngan during his visit.

On May 12, the Vice President will participate in the 16th United Nations Day of Vesak at Tam Chuc Pagoda in Vietnam’s northern Ha Nam province and deliver the keynote address at the inaugural of the event.

The Secretary to the Vice President of India, Dr. I.V. Subba Rao, the Secretary (East), Ministry of External Affairs, Smt. Vijay Thakur Singh, the Ambassador of India to Vietnam, Shri P. Harish and other dignitaries were present on the occasion.

“It gives me immense pleasure to be visiting Vietnam, on my first trip to this beautiful land as the Vice President of India.

The progress and development undertaken by the country is impressive. This is an important year for us as we celebrate the 90th Anniversary of the celebrated visit of the Gurudev Rabindranath Tagore to Saigon in 1929. That visit started the intense re-engagement of India with Asia in the modern era and raised the profile of each country in the public consciousness of the other.

The relationship between India and Vietnam is civilisational and historic and our partnership has stood the test of time. More than 2000 years ago, Indian monks and traders brought with them the message of peace and compassion of Lord Buddha to Vietnam.

Our successive generations of leaders starting from Ho Chi Minh and Mahatma Gandhi to the current leaders have built upon this trust and goodwill. I am proud to be a part of this rich tradition.

I am honoured and humbled to participate in the 16th UN Day of Vesak celebrations in Ha Nam Province representing India, the land of Buddha, where I would be delivering the key note address.

I look forward to my official engagements with Vice President Dang Thi Ngoc Thinh, Prime Minister, Mr. Nguyen Xuan Phuc and Chairperson, National Assembly of Vietnam, Nguyen Thi Kim Ngan in this visit. Such regular interactions at the highest levels between our countries have brought about a greater understanding and synergy in our Comprehensive Strategic Partnership.

I am happy to inform you that Jaipur Foot Artificial Limb Fitment Camp was successfully conducted in two Vietnamese provinces last year which benefitted hundreds of Vietnamese citizens.

Under the ‘India for Humanity’ program of the Government of India to commemorate 150th Anniversary of Mahatma Gandhi, we are conducting Jaipur Foot Artificial Limb Fitment Camps. I would visit the camp on Saturday  and interact with some of the beneficiaries.

India has been a steady and strong developmental partner of Vietnam. Over the years, Vietnam has been successful in making huge socio-economic advances. Sustained high levels of economic growth, combined with vision and foresight of its leadership, has ensured rapid progress, development and prosperity.

Agricultural growth has been a key driver of this remarkable feat. As a development partner, we feel privileged to have contributed to Vietnam’s agricultural revolution and food security. Under the Comprehensive Strategic Partnership, India is committed to continue its development assistance to Vietnam.

India is currently offering more than 130 scholarships under the ITEC programme and around 48 scholarships for higher studies in India provided by the Indian Council for Cultural Relations.

A dedicated Archaeological Survey of India team has been working in Vietnam for the past 3 years for the conservation and restoration of the UNESCO World Heritage Site of MySon in Vietnam. We also look forward to expanding our development partnership assistance to the Cham community in the Ninh Thuan province through the implementation of our grants-in-aid projects.

This year, our country celebrates the biggest festival of democracy in the world. We are currently conducting the General Elections where more than 900 million registered voters, of whom over 15 million electors are first time voters in the age group of 18-19 years, would be participating. I would encourage my fellow citizens to be a part of these celebrations and participate whole heartedly in the elections back home.

Though small in number, the Indian community in Vietnam has numerous achievements to its credit and is well respected in the society. Indians and Indian business and industry in Vietnam have been instrumental in promoting bilateral understanding and creating opportunities for the local economy and society.

It is a matter of satisfaction that our trade has nearly doubled from US Dollars 7.8 billion in 2016 to nearly US Dollars14 billion.

Yoga has been a great binding force and is hugely popular in Vietnam. Vietnamese people have welcomed Indian culture, Indian television serials and enjoyed cultural immersion experiences provided by the Swami Vivekananda Cultural Centre in Hanoi.

I am happy to share with you the ambitious, transformative vision that is making India one of the most favourite investment destinations in the world.

Over the past half a decade, India has witnessed a positive swing in stock market indices, foreign exchange reserves and public investment in infrastructure.

Indian economy is growing around 7.2 to 7.4 %, currently is one of the fastest growing major economies of the world. India is moving fast forward to transform itself into a modern 21st century inclusive economy.

India has become the fastest growing large economy in the world. We will be a USD 5 trillion economy and the 3rdlargest consumer market in the world by 2030. The India story, as it is unfolding today, is a promising one.

India ranked 3rd in the World Economic Forum’s list of most trusted governments in 2017. And we climbed 23 places in 2018 and 30 places in 2017 in the World Bank Ease of Doing BusinessIndex. Red Carpet No Red Tape.

Under the Jan DhanYojna, 38.03 Crore bank accounts have been opened in India. With Online, DBT, JAM More than Rs. 90,000 Crore have been saved due to Direct Benefit Transfer to individual bank accounts and elimination of middlemen.

India is augmenting its infrastructure at an unprecedented rate. India has 1,31,326 Kms of National Highways and almost  27 Kms of roads are being built every day.

Our rural road connectivity has increased to 91%. Almost 2000 Kms of coastal connectivity roads have been identified for construction.India is now the world’s third largest aviation market. TheUDAAN scheme that envisages affordable air travel, has added 40 more airports to the already existing 103 airports. Domestic air passengers crossed 120 million for the first time in 2018.Upgradation, modernization of airports is also going on.

All villages are now electrified in India.

A host of path breaking reforms has been initiated, including the transformational tax reform, The Goods and Services Tax was implemented creating a single unified market in India for the first time in its history. It is world’s largest revolutionary taxation transformation.

The tax base has widened and tax compliance has improved considerably with a jump of 80.5% taking assesses to 6.85 Crore in 2017-18.

Make in India for manufacturing, Digital India for digital connectivity, MUDRA for microfinance, Ayushman Bharat for health insurance are some of our flagship schemes for inclusive and sustainable development.

India is changing rapidly. The business environment is changing for the better.  The archaic regulations are being dismantled.  Seamless processes are being introduced.

Three D`s which are Democracy, Demand and Demographic Dividend are scripting India`s story. Indian Diaspora is the fourth D in the picture.

I invite you all to join and contribute to these efforts and take part in this development agenda.

The role and importance of the overseas Indian community in the progress and development of our nation is undeniable. Indians abroad are increasingly important facilitators in identifying new opportunities for collaboration and growth and are our ambassadors for building better cultural understanding and harmony.

Before, I conclude, I would like to share with all of you that our Government has made it a priority to reach out to our overseas community and there is new and vibrant connect between us. To serve them better, we have strengthened our Embassies to provide round the clock service, so that no one in need is left un-attended. We are utilizing social media and other digital platforms such as MADAD to deliver efficient public services.

I wish each one of you all success in your professional and personnel endevours. I hope you will continue to cherish your Indian roots and the rich cultural tradition you have inherited and nourish the socio-economic and cultural life of Vietnam

You are India’s cultural ambassadors and the world sees you as the representatives of Indian values and way of life.

I am happy that many of you have done India proud.

Please continue the mission of carrying India’s message to the world in your interactions with other country men and women. Also bring back the best from other countries to India so that our country can advance much more rapidly.

I also thank the Indian Business Chamber in Vietnam for playing an active role in engaging the Indian community and energizing links between business and industry of the two countries. I would like to thank our Vietnamese friends who have showered their Indian friends living here with friendship and affection.

We must come together with pride and purpose and help each other grow and prosper. I hope this bond of friendship and mutual trust between our nations and peoples grows stronger with time. 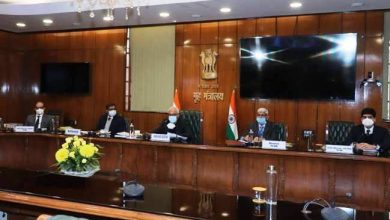 Dr. Harsh Vardhan writes to all CMs- Calls for strict action against any person who assaults doctors