New Delhi: The Indian Naval Ships Sahyadri, Shakti and Kamorta of the Eastern Fleet under the command of Rear Admiral Dinesh K Tripathi, NM, Flag Officer Commanding, Eastern Fleet, currently on an overseas deployment to South East Asia and the Western Pacific, would be participating in the 22nd edition of Exercise Malabar, off Guam, USA from 07 to 16 June 2018. The three Indian Naval Ships are scheduled to reach Guam on 07 June 18 for the Harbour Phase of the exercise. It is for the first time the Malabar Exercise is being conducted at/ off Guam, a US Territory. Malabar 2017 was held in July last year on the Eastern Sea Board of India, off Chennai and Visakhapatnam. Malabar 2018 will have the participation of navies from India, the US and Japan.

Over the last 26 years, this Maritime Exercise has grown in scope and complexity and aims to address the variety of shared threats and challenges to maritime security in the Indo-Pacific. Further, the exercise contributes towards increasing the level of mutual understanding, inter-operability and sharing of the best practices between the three navies.

The scope of the MALABAR-18 includes professional interactions during the Harbour Phase in Guam from 07 to 10 June 18. The Sea Phase from 11 to 16 June 2018 includes a diverse range of activities at sea including Aircraft Carrier operations, Air Defence, Anti-Submarine Warfare (ASW), Surface Warfare, Visit Board Search and Seizure (VBSS), Joint Manoeuvres and Tactical procedures. 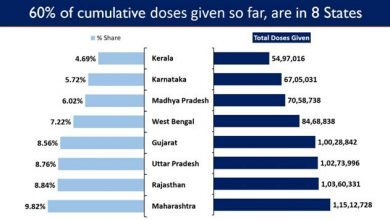 India’s Cumulative Vaccination Coverage exceeds 11.72 Crores with over 27 Lakh doses given in the last 24 hours

Delegation from Pacific Pension and Investment Institute, calls on PM

Make ethics and excellence as your guiding principles: Vice President