New Delhi: As per the World Economic Situation and Prospects 2018 report of the United Nations, the Indian economy is projected to grow at 7.2 per cent in 2018-19 and 7.4 per cent in 2019-20. The report indicates that the outlook for India remains largely positive, underpinned by robust private consumption and public investment as well as ongoing structural reforms.

The confidence in the Indian economy has increased on account of policy measures taken up by the Government and the Reserve Bank of India. Moody’s rating agency upgraded India’s local and foreign currency issuer rating to Baa2 with a stable outlook from Baa3 on the expectation that continued progress in India’s economic reforms will enhance India’s growth potential over time. According to World Bank’s Ease of Doing Business 2018 Report, India’s ranking improved by 30 positions to 100th rank in 2018. As per the World Economic Forum, India’s rank in Global Competitiveness Index is 40 out of 137 countries in 2017-18, improvement over 71 out of 144 countries in 2014-15 and 55 out of 140 countries in 2015-16.

The Government of India has taken various initiatives to improve the confidence in the Indian economy and boost the growth of the economy and which, inter-alia, include; fillip to manufacturing, concrete measures for transport and power sectors as well as other urban and rural infrastructure, comprehensive reforms in the foreign direct investment policy, special package for textile industry, push to infrastructure development by giving infrastructure status to affordable housing and focus on coastal connectivity. For highways development the Bharatmala Pariyojana has been launched. The Government has launched a phased program for bank recapitalization. This entails infusion of capital to the public sector banks, which is expected to encourage banks to enhance lending. The Insolvency and Bankruptcy Code was enacted to achieve insolvency resolution in a time bound manner. The introduction of the Goods and Services Tax (GST) has provided a significant opportunity to improve growth momentum by reducing barriers to trade, business and related economic activities. Budget 2018-19 included various measures to provide a push to the economy, which among others, include major push to infrastructure via higher allocation to rail & road sector, reduced corporate tax rate of 25 per cent for companies with turnover up to Rs. 250 crore which is expected to help 99 per cent of MSMEs, etc.

This was stated by Shri P. Radhakrishnan, Minister of State for Finance in a written reply to a question in Lok Sabha today. 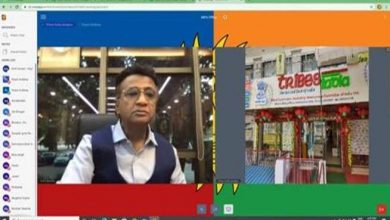