New Delhi: With only 16% of the summary sales returns under the goods and services tax (GST) matching with the final returns, the revenue department has started to analyse major gaps with a view to check any possible tax evasion.

According to the GST returns data, 34% of businesses paid Rs34,400 crore less tax between July-December while filing initial summary return (GSTR-3B). These 34% of the businesses have paid Rs8.16 trillion to the exchequer by filing GSTR-3B, whereas analysis of their GSTR-1 data show that their tax liability should have been Rs8.50 trillion.

As per the analysis by the revenue department, initial returns filed and taxes paid by 16.36% of the businesses have matched with their final returns and tax liability. They paid a total tax of Rs22,014 crore. However, the data also showed that there was excess tax payment of Rs91,072 crore by 49.36% of businesses registered under GST between July-December. While they have paid Rs6.50 trillion as GST, the GSTR-1 filed by them shows that their liability should have been Rs5.59 trillion.

The revenue department has analysed the GST returns data filed by over 5.19 million businesses during July-December, 2017. The indirect tax reform GST was rolled out from 1 July 1, 2017.

EY partner Abhishek Jain said, “While the differences in the liabilities reported in GSTR- 1 vis-a-vis that in GSTR-3B would need to be analysed in detail by the government, one of the contributor to the difference could be non-consideration of credit/debit notes in the GSTR-1 data, which would have been considered for GSTR-3B numbers”.

The GST council, headed by finance minister Arun Jaitley and comprising state counterparts, had on 10 March decided to further analyse data gaps between self-declared liability in GSTR-1 and the taxes actually paid while filing GSTR-3B.

AMRG & Associates partner Rajat Mohan said, “84% of taxpayers reporting incorrect revenue statements, is a matter of concern. Triumph of GST depends on self-assessment mechanism for which we have to adopt completely bias-free, independent, automated, and digital tax regime, which would be impossible if such high number of taxpayers are committing errors in data entry”.

For the 4th successive day, India tests more than 6 lakh samples in 24 hours

President of India’s Greetings on the eve of Janmashtami 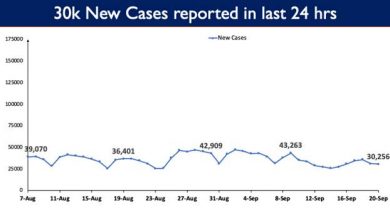