The Prime Minister specially mentioned the State of Meghalaya, which received an award for its achievements in agriculture, in the period under review.

The Prime Minister appreciated the spirit and the hard work of our farmers, for their achievements in agriculture since independence. He said that today, there is record production of foodgrains, pulses, fruits and vegetables, and milk. He said that there are important challenges in agriculture today, which reduce the farmer’s income, and increase his losses and expenditure. He said the Government is working with a holistic approach to deal with these challenges. He said the aim remains to double farmers’ incomes, and make the farmers’ lives easier.

Speaking about the progress towards this resolve, the Prime Minister said that more than 11 crore soil health cards have been distributed so far. 100 percent neem coating of Urea has also resulted in lowering expenditure on fertilizer, apart from raising productivity.

He said that through the Pradhan Mantri Fasal Bima Yojana, premiums have been lowered, capping on insurance removed, and claims amounts disbursed to farmers have gone up. He said the Pradhan Mantri Krishi Sinchai Yojana envisions water for every farm. 80,000 crore rupees are being spent to complete pending irrigation projects.

He said the Kisan Sampada Yojana is helping strengthen the supply chain from the farm to the market, and creating modern agriculture infrastructure. He said Operation Greens, announced in the recent budget, will be beneficial for farmers growing fruits and vegetables, especially Tomato, Onion and Potato.

He said several Model Acts related to farmers’ welfare have been prepared, and States have been urged to implement them.

The Prime Minister said that the Government is working to ensure that farmers get modern seeds, adequate power supply, and easy market access.

He said that the Union Government has decided that for all notified crops, MSP will be at least one and a half times the cost. He said that for this purpose the cost will include elements such as labour, rent for machinery, cost of seeds and fertilizers, revenue being given to State Government, interest on working capital, and rent of leased land.

The Prime Minister said comprehensive steps are being taken for Agriculture Marketing Reforms. It is important to connect Rural Retail Markets with wholesale and global markets. He said that in the recent Union Budget, Grameen Retail Agriculture Markets have been envisaged. 22,000 rural haats will be upgraded with necessary infrastructure, and integrated with APMC and the e-NAM platform.

He said the Krishi Vigyan Kendras (KVKs) will play a key role in this regard.

The Prime Minister explained how honey-bees could be an important source of additional income for farmers. Similarly, he spoke of the benefits of solar farming. He said about 2.75 lakh solar pumps have reached farmers in the last three years. The Prime Minister also spoke of the Go-Bar Dhan Yojana for creating compost, bio-gas etc from bio-waste.

The Prime Minister said crop residue burning has harmful effects, and if the crop residue is instead returned to the soil through machines, it will have beneficial effects.

The Prime Minister said that the Government is working to ensure that adequate Agriculture Credit is available.

The Prime Minister said that such events should also be held in far-flung areas. He also called for impact analysis of such events. 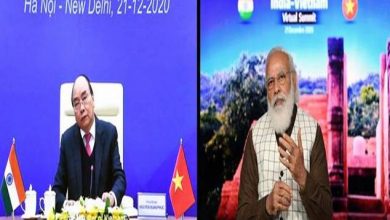