New Delhi: Union Minister of Agriculture and Farmers’ Welfare, Shri Radha Mohan Singh said that for the last 20 years India has been the largest producer of milk in the world. Shri Singh lauded the role of National Dairy Research Institute (NDRI) like research centres for catering to the technical and human resource requirements of the dairy sector. UnionAgriculture Minister said this at the 16thconvocation ceremony of ICAR-National Dairy Research Institute (NDRI) in Karnal (Haryana) today.

Shri Singh said that the milk production has increased by 20% from 137.7 million tonnes to 165.4 million tonnes between 2014 and 2017. The per capita availability of milk has risen by 15.6% from 307 gms/day to 355 gms/day between 2013-14 and 2016-17. Similarly, the income of dairy farmers has increased by 23.77% between 2011-14 and 2014-17. He informed that the Government is committed towards ensuring more income to farmers, uplifting the economically backward sections of society, youth employment, better education and healthcare.

Union Minister said that the Government has initiated the “National Mission on Bovine Productivity” in order to help the benefits of animal husbandry schemes reach the farmers directly.  In order to increase the number of cattle and buffaloes through breeding inputs, the Government, under this scheme, is spending Rs 825 crores for genetic upgradation. The scheme has been a roaring success in terms of increasing milk production and productivity and thereby proving beneficial to the dairy business. The Government has started a portal e-pashuhaat, under National Mission on Bovine Productivity, to connect breeders with milk producers.

Shri Singh said thatBudget 2018 has laid special emphasis on animal husbandry. In the previous budget, the Dairy Processing & Infrastructure Development Fund (DIDF) was set up with National Bank for Agriculture and Rural Development (NABARD) with a corpus of Rs 10,881 crore. This year, the Government, with a corpus of Rs2,450 crore, has set up an Animal Husbandry Infrastructure Development Fund (AHIDF) for financing infrastructure requirement of animal husbandry sector. In order to meet the working capital requirement of dairy farmers, the facility of Kisan Credit Card has been extended by the government to the fisheries and livestock farmers.

Agriculture Minister said that these initiatives of the Government are intended to increase the potential of self employment in livestock through entrepreneurship. NDRI is committed to training the youth so that they become job-providers instead of job-seekers.He expressed satisfaction over the BPD unit of NDRI in training entrepreneurs.

Shri Singh said the Government has launched “RashtriyaGokul Mission” that aims to conserve and develop indigenous breeds. Acting as centresfor the development and protection of Indigenous Cattle breeds, 20 Gokul Grams have been approved in 13 states.The Government has established two National Kamdhenu Breeding Centres in the country, in Itarsi, Hoshangabad in Northern region and in Chintaladevi, Nellore in Southern region.

The human resources of the universityhas enabled in the development and propagation of technologies that is facilitating in enhancing income of the farmers. 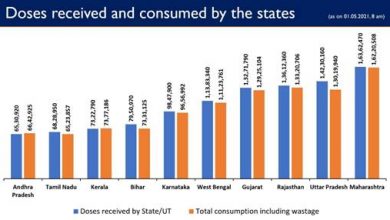 Govt. of India has so far provided more 16.37 crore vaccine doses to States/UTs Free of Cost

Safeguard the interests of agri- producers as well as the consumers: Vice President