The Centre for United Nations Peacekeeping (CUNPK) is conducting jointly with the US, the second edition of United Nations Peacekeeping Course for African Partners (UNPCAP-02) in New Delhi from 17 July to 04 Aug 2017.
The opening session for this course was conducted on 17 July at the Manekshaw Centre in New Delhi. Mrs Ruchi Ghanashyam, Secretary (West), Ministry of External Affairs chaired the inaugural session and welcomed the officers while briefing the audience on the commitment of India towards the UN. Other eminent speakers to speak on the occasion included Lt Gen JS Cheema, Deputy Chief of Army Staff (IS&T), Lt Gen Vijay Singh, Director General Staff Duties  and Chargé d’Affaires, a.i. MaryKay L Carlson of the U.S. Embassy in New Delhi.
The course is aimed to build and enhance the capacity of the African Troop Contributing Countries to the UN and to further train the trainers from these countries. The course, which revolves around the concept of training the trainers, as stated by the UN, is one of the many steps that India has initiated towards active contribution to peace support activities. Course is being attended by officers from 19 countries including India. The students include officers who are currently employed in their respective peacekeeping training centres in African peacekeeping training institutions.
The training incorporates topics on operational and logistical matters, humanitarian issues, thematic topics, Blackboard and table Top exercises and mission briefs. The course is also targeted to assist the student officers to further train officers in their respective countries on the nuances of peacekeeping. Internationally the course is already being seen as a milestone in many ways. 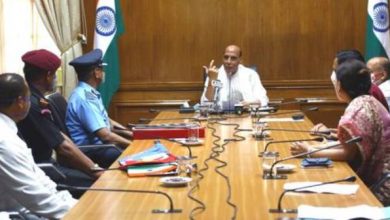 Lok Sabha Speaker Om Birla said that the legislative, executive and judiciary wings should all fulfil their responsibilities to build a New India

Statehood of Jammu and Kashmir to be returned as soon as possible: Amit Shah