New Delhi: The Vice-President, Shri M. Venkaiah Naidu declared that he has taken up as a mission to regularly interact with students, young researchers and scientists to motivate them to build a better and secure India.

Interacting with scientists and students during his maiden visit as the Vice- President to a CSIR institution— the NGRI in Hyderabad, he announced that he would henceforth regularly visit various universities and scientific institutions to motivate them as also to understand the academic and research activities being undertaken by them.

Recalling the famous words of Mahatma Gandhiji : “ Earth produces enough to satisfy every man’s needs, but not every man’s greed”, he asked the scientists of NGRI, CCMB and IICT to work for physical security to protect from natural hazards like earthquakes, energy security and water security and ensure a safe and secure future for the people.

Cautioning against “playing with nature”, the Vice-President asked the people to protect and preserve nature and culture for ensuring a better. Emphasizing the importance of using water judiciously, he said “reduce, re-use and recycle” water.

During his two-hour long interaction with Directors of NGRI, CCM and IICT as well as senior scientists from other CSIR institutes, he appreciated the efforts of the respective institutions and enquired as to how their research was translating to provide last mile connectivity and empowering the farmers and the common man. He wanted to know if their technologies were helping the farmers to make value addition and if improved varieties of seeds were  reaching all farmers and whether the researchers were spending enough time in the villages to understand the problems faced by farmers.

He also enquired about the earthquake-resistant technologies for protecting buildings and in particular vital installations, dams and bridges.

Observing that science and technology has been an integral part of India’s culture and tradition, he told the scientists to find solutions to the present and emerging problems.  “Mankind faces numerous challenges related to climate change, global warming, sustainable development, clean energy, water etc., I earnestly urge the earth scientists present here to work towards sustainable goals, meet societal needs and facilitate nation-building. The ultimate goal of science and technology is improvement in the quality of the life”.

The following is the full text of the Vice-President’s address to the scientists:

“It is indeed, a matter of great pleasure for me, to visit National Geophysical Research Institute (NGRI), a pioneering Institute of Earth Sciences based in the city of Hyderabad.

I am aware that NGRI is a premier geo-scientific research organization established in 1961 under the aegis of the Council of Scientific and Industrial Research (CSIR), India’s largest Research and Development organization.

CSIR is known for its cutting edge R&D knowledge base in diverse S&T areas and today it is a globally benchmarked R & D organization. I am pleased to note that CSIR has been ranked 9th in the world amongst the 1207 government institutions, with an overall global ranking of 75 in the world, covering 5250 institutions. In the Asiatic region, it ranks 14th out of 1431 entities, and at No 3 among 284 Government-funded research bodies, with only Chinese Academy of Sciences and Japan Science and Technology Agency ahead of the Council. CSIR is the only Indian organization among the Top 100 global institutions. A total of 252 Indian organizations are covered in the evaluation.

Science and technology has been an integral part of India’s culture and tradition. Ancient India was known for the rich scientific contributions—right from the use of zero, precise calculation of eclipses, concept of atom, to Shushruta Samhita involving complex surgery and Charak explicitly describing diseases, their causes and modes of treatment. The civilizations of Mohenjo Daro and Harappa are ample proof that ancient India was more advanced than the rest of the world at that time. Therefore, in keeping up with our rich tradition, the onus lies on the scientific community at large, to scale up research and development activities in different domains for meeting the aspirations of the common man.

It is notable that through its unique R&D interventions, CSIR is addressing national goals and Missions such as Swachh Bharat, Swasth Bharat, Samarth Bharat, Make in India, Startup India and Skill India.

There are 17 sustainable development goals identified by the United Nations, and NGRI having a vast repository of knowledge and expertise, must strive to become the forerunner in areas such as water and sanitation, climate change, energy and in its sustainable production and consumption. There are many societal needs which can be addressed through scientific innovation. Scientists need to put in concerted efforts to provide solutions to the many problems faced by mankind and ensure that Mother Earth is a better place to reside for the present and future generations to come.

I feel, R & D must focus on both—basic research and finding solutions to day-to-day societal problems. Of course, there is a need to step up R & D funding, which cannot be done by government alone. The corporate sector, especially bodies like CII and FICCI, should identify some areas of applied research and set up a corpus to fund innovations in those fields.

There is also a need for various Indian scientific institutions to increase the number of patents and research publications in international journals.

I have taken note of the fact that CSIR-NGRI has carved a niche for itself in the global map of geo-science research organizations through its research activities relating to fundamental understanding of the earth system and processes, earthquake hazards, exploration and management of ground water, hydrocarbons and minerals. Such research activities will help various stakeholders, including the government and the private sector, to make informed decisions on sustainable use of geo-resources.

Bibliometric analysis of research in the field of Earth System Science has revealed that on an average, Indian researchers contribute about 5% of papers in Earth Sciences published worldwide. I am sure all of you will agree on the need to improve it.

With respect to Geosciences, NGRI occupies the foremost position in India, and it is commendable that India is ranked 9th globally regarding publications in the field of Geosciences.

I am glad to note that CSIR-NGRI research programs are broad based and aligned to national priorities and Missions of the Govt. of India. The innovative methods using satellite and helicopter-based technology have opened a new vista for ground water studies and also provided inputs for the Namami Gange (Clean Ganga programme).Interesting scientific intervention at Choutuppal Mandal, in the construction of a percolation tank, for watershed management, is being adopted by the Telangana State Government, under the Mission Kakatiya Programme for conservation of water resources across the state of Telangana. This is an important step in tune with Government’s mandate of enhancing cultivable land and doubling agrarian income by 2022, when India celebrates 75 years of its Independence.

I am pleased to know about the research projects undertaken by NGRI such as earthquake hazard assessmentand modelling tsunamigenic impact on east and west coast to provide safety and security to people and vital installations; uranium exploration to ensure self-reliance in nuclear power and identification and quantitative assessment of gas hydrates along the Indian continental margin for an alternative source of energy.

I would also like CSIR and its institutions like the NGRI to popularize science so that more and more children get interested in pursuing science subjects. No country can make progress without strong scientific foundations. We also need to have state-of-the-art R & D base that will cater to both, the academia and the industry. Of course, there is also a need to expand the linkages between scientific institutions, universities and the industry to promote innovations and research that is relevant to our needs.

I would like to conclude, by placing emphasis on the fact, that science is the one and only medium that can provide solutions for the present and emerging problems in the years to come. Mankind faces numerous challenges related to climate change, global warming, sustainable development, clean energy water etc, and hence I earnestly urge the earth scientists present here, to work towards sustainable goals, meet societal needs and facilitate nation building. 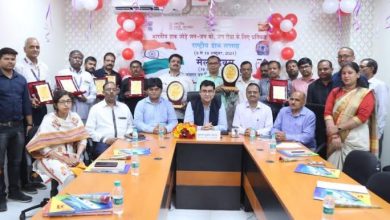