New Delhi: Giving a call to develop technology that can make programme implementation more efficient,  reduce corruption and increase the response time in emergency in an effort to reach the unreached, Principal, D.G P.G College, Kanpur, Smt. Sadhna Singh has said that for this to happen, research and innovations need more input from women.   Speaking at the first session of 7th Women Science Congress in Imphal today, Smt. Singh pointed out that technology can become a monitoring tool, but the real empowerment of women will come about only with the support of health workers, officials and policy-makers.  “Low-cost technology and innovations can make the difference, especially in the fields of water purification, hygiene and sanitation, controlling vector-borne diseases and early diagnosis of communicable and non-communicable diseases”, Smt. Singh stated.

Quoting statistics on the condition of health of women, she said that breast and colon cancer account for 27 per cent and 22.86 per cent of all cancer-related deaths in the country.  She strongly emphasised the need for easily accessible and user-friendly cancer detection kit to save women.  Smt. Singh also pointed out that more than 47 per cent of people living with HIV infection in India are women and children.  “Environmental degradation and pollution pose a challenge and adds to complexities in a woman’s life”, she said.    She added that about 350 million Indian households use coal, wood or cowdung-fired Chullah and referred to low-cost technologies like Briquette developed from combustible biomass that have provided succour to thousands of womenfolk from the hills.

In a presentation on the role of women in science, Head, Department of Botany, Maharaja College, University of Rajasthan, Jaipur, Dr. Vidya Patni said that factors such as lack of encouragement, stereotypes, child care, competition, marginalisation and bias act as obstacles in increased representation of women in the field of science and technology.  She stated that the Government is trying to increase the number of women scientists and more than 1, 000 project proposals from women have been cleared in an year recently.  Dr. Patni also referred to Department of Science & Technology’s DISHA programme for research in various fields of science and technology, comprising of Women Scientist Schemes A for Basic/Applied Sciences, Women Scientist Schemes B for Societal benefit and Women Scientist Schemes C for internship in Intellectual Property Rights (IPRs) and self-employment.  She underlined the need for three Rs – Recruitment, Retention and Recognition of women in scientific institutions and research.   She also mentioned other UGC schemes for hostels for women in economically backward areas, scholarship for single girl child, skill education through National Skill Mission and establishment of 150 women study centres.

Prof Asha Gupta from Department of Medical Sciences, Manipur University, also delivered a talk on the impact of climate change on the health of women in the country. 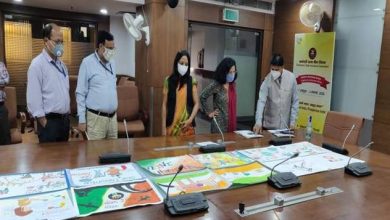 Durand Cup in Manipur symbolises the rise of a ‘New India’, where all states/UTs together are taking the country to greater heights, says Shri Rajnath Singh