Dehradun: Uttarakhand Chief Minister Mr. Trivendra Singh Rawat who informally met media persons after a press conference addressed by Union Human Resource Development Minister Parkash Javadkar at a local hotel, said that the central government under the leadership of Prime Minister Mr. Narendra Modi has taken several welfare measures during the past four years for the overall development of the country.

The ‘New India vision’ of Prime Minister is big step towards taking the country on the path of prosperity and development. He said that country has earned unprecedented prestige at the international level. The country has reached new heights in the economic, social progress and development. The ‘Swatchatta’ coverage of the country has increased from 38 per cent to 83 per cent. In the past four years, remarkable work has been done under road transport. Under the National Health Security Mission, poor families are being given health insurance coverage up to Rs. Five lakh. In the past two years, four crore women have been provided LPG kitchen gas connections under ‘Ujjawala scheme’ giving them from smoke free lives.  A target to provide houses for all has been fixed for the year 2022 under ‘Prime Minister Awas Yojna’.   The central government has done away with 1200 irrelevant laws. The “Beti Bachao, Beti Padhao’ is being vigorously pursued by the Prime Minister.

Chief Minister Mr. Trivendra Singh Rawat said that as per ‘Zero Tolerance’ policy adopted by Prime Minister Mr. Narendra Modi, there is no allegation of corruption against any minister. He said that introduction of GST has eased tax system and trade. The work on the bullet train between Ahmedabad and Mumbai has been going on at a fast pace. Under ‘Saubhagya Yojna’, crores of houses have been provided electricity connection.  He said that solid steps are being taken to double the income of farmers. 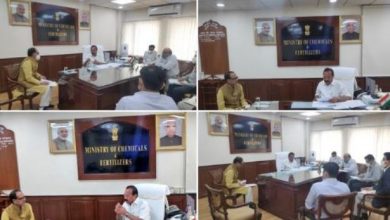